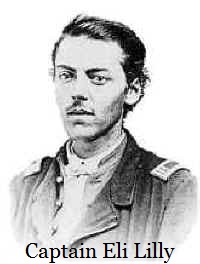 History of the 18th Independent Battery Indiana Light Artillery
Eighteenth Indiana Light Battery.— Capts.,  Eli Lilly, Joseph A. Scott, Moses M. Beck. This battery was
organized at Indianapolis in the summer of 1862 and was mustered in Aug. 24. It left the state soon after for Louisville, where it was assigned to the 4th division of the 14th army corps. The battery marched to Bowling Green via Frankfort, thence to Gallatin, Tenn., and upon the occupation of Murfreesboro by Gen. Rosecrans' army it moved there. The army moved towards Tullahoma in June, 1863, the battery with its brigade (Wilder's) in the advance. The enemy was encountered at Hoover's Gap, the brigade charging and driving him through the gap upon his reserves, where he formed line of battle, but the battery opened so warm a fire that he was driven from the field. Chattanooga was reached soon after the enemy abandoned it. The battery was engaged at Chickamauga, aiding in repelling a charge of Longstreet's columns, its execution being terrible and more than flesh and blood could withstand. After the battle the battery moved up the Tennessee river for the purpose of guarding the fords, and in October it was with Crook's command in pursuit of Wheeler in the Sequatchie Valley. The enemy was found and routed at Thompson's cove, and three days later he was again overtaken and a sharp fight ensued in which the battery vigorously shelled the Confederates' position, driving them through McMinnville in confusion. 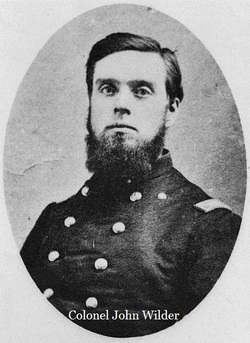 It moved to Huntsville, Ala., but retraced its steps, and after the battle of Missionary Ridge it was sent with its division to the relief of Gen. Burnside at Knoxville, being engaged at Mossy creek, Fair Garden, and Dandridge. Capt. Lilly was promoted major of the 9th Ind. cavalry in April, 1864, and Lieut.Beck succeeded to the command. In May the battery marched with Sherman's army in the Atlanta campaign being engaged at Resaca, Stilesboro, Cassville, Lost Mountain, Vining's bridge, Newnan, Hopkinsville and West Point, and after the evacuation of Atlanta joined in the pursuit of Hood, proceeding to Nashville. Moving to Hopkinsville, Ky., it was in an engagement with the enemy. From there it marched to Eastport, Miss., and from there with Wilson's command to Selma, Ala., engaging the enemy there, and then took part in the raid through Alabama and Georgia to West Point and Macon, where the enemy was defeated and a large quantity of military stores destroyed. It then returned to Chattanooga, thenceto Nashville, from which city it moved for Indianapolis June 23, 1865, with 3 officers and 180 men. It was mustered out June 30, 1865. The battery left for the field with 151 men and officers and received 45 recruits. In Nov., 1864, 65 men of the 11th Ind. battery were transferred to the 18th. Thirty-two were killed or died of disease and 26 were discharged for disability.
This history was taken from "The Union Army" by Federal Publishing Company, 1908 - Volume 3 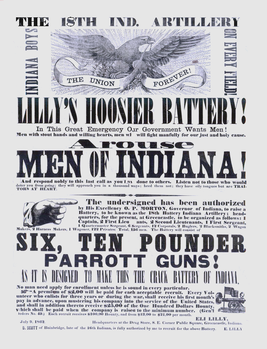 Other Interesting Facts about Eli Lilly, The 18th and the Lightning Brigade
Eli Lilly started out his military career with 21st Regiment of the Indiana Volunteer Militia as a Second Lieutenant at the age of 23. His first six months in the Union army were less than exciting, to say the least, he was sent to Baltimore for garrison duty... Lt. Lilly resigned his commission and returned to Indianapolis, where he quite literally begged Governor Oliver Morton for his own artillery battery. He promised the governor that his battery would be the crack battery of Indiana. Governor Morton granted his request. Newly promoted Captain Lilly and his 156 men (1 captain, (himself), 4 lieutenants, 1 first sergeant, 1 quartermaster sergeant, 6 sergeants, 12 corporals, 2 buglers, 2 black-smiths, 2 wagon-makers, 2 harness-makers, 1 wagoner and 122 privates), received their six 3" ordnance rifles (not Parrot rifles, like the recruiting poster stated) on September 1st, 1862. Just a few days later they rushed out of Camp Morton to face Bragg in Kentucky...
The battery was later added to Colonel John T. Wilder's brigade. It was here that the battery acquired their four mountain howitzers.
Initially known as the "Hatchet Brigade" because of the long handled hatchets that were issued to his men instead of sabres, the brigade later picked up the nick-name "The Lightning Brigade". The Lightning Brigade's men were also  armed with Spencer repeating rifles, which were capable of firing twenty rounds per minute. This was much higher than the standard two or three rounds per minute that the average musket that their rebel counterparts carried were capable of producing. It is interesting to note that each of Wilder's men personally co-signed a bank loan to pay for his Spencer, but the government stepped in and paid for the rifles before any of the money came out of the men's pay.